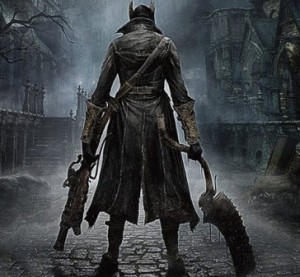 Bloodborne was recently released on PS4, and after a touch-and-go past with Demons’ Souls and Dark Souls I decided to give it a try.  My PS4 has little to do between now and Batman: Arkham Knight, so I tried to pump myself up for yet another soul-crushing gaming experience in the meantime courtesy of From Software.

So far I’m about 5 hours in, and have managed to beat the Cleric Beast and Father Gascoigne.  It’s still early on, but I’ve been slowly but steadily finding an approach that works for me.  The first few hours in Central Yharnam were the most frustrating thus far.  As with the previous games there’s not a lot of hand-holding to tell you where to go, what to do, or how to most-effectively play.  “Let’s try stealth to take out this crowd,” you might say to yourself.  Yet after about the 50th time being brutally butchered something happens in your brain and you realize that hey, you could just throw a molotov cocktail their way and run right on past!

Bloodborne is stupidly difficult at times, but not unfair.  Once you get a solid grasp on the fighting mechanics and keep pushing outside your comfort zone to new creepy areas you begin to appreciate how the world works and how you’re being coaxed to interact with it.  Whereas you would likely be dead in a matter of minutes early on, you gain confidence slashing your way through enemies with ease who once were the bane of your existence.

I fully expect to be maddeningly frustrated at numerous points ahead, but for now I’m enjoying a sustained feeling similar to your first time on a bike without training wheels after several falls: it’s shaky going, you’re always a little scared something could go wrong, you’re holding on for dear life, and yet somehow you’re exhilarated to still be moving forward, gaining confidence, and the minute you jump off you look back at the bike and can’t wait to get back out there again.