EVERY ONE HUNDRED YEARS… 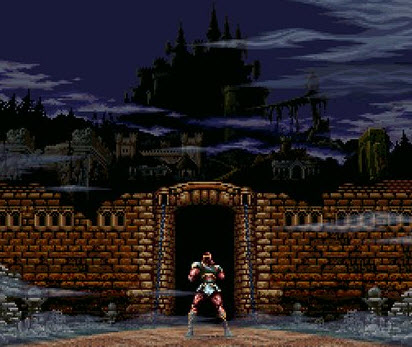 Super Castlevania 4 is my favorite game of all time. Let’s just go ahead and get that out of the way up front. As a kid growing up in the 80s/90s I had already traversed the many creepy locales in and around The Count’s infamous home via Castlevania, Castlevania II: Simon’s Quest, and Castlevania 3: Dracula’s Curse. I’d never beaten Castlevania (I was woefully outmatched as a 7 year old), I defeated a much easier Dracula in Simon’s Quest thanks in no small part to Nintendo Power providing the password and step-by-step directions for driving a stake in the heart of that chapter, and struggled against an unrelenting Dracula’s Curse and rage-quitting before it became a “thing”. Needless to say, the early Castlevania games didn’t go easy on this gamer as a young lad, but the amazingly horrific art design, you-against-the-world scenario, and atmospheric music captured my imagination.

I was 11 years old in 1991 and vividly remember SCIV being released on Halloween of that year. A lifelong friend of mine and I rented it immediately from a local video store; and literally took turns playing it back-and-forth on each continue for hours until we beat it. It’s still one of those memories that is crystal clear in how happy I was during that time. I remember my mom actually got it for me as a Christmas present that year from a mall-based Babbages shop, and after realizing I’d already played and beaten it just a couple months later didn’t shed a tear when I wanted to trade it in for another game at Funcoland that was, in hindsight, completely forgettable.

Months or even years passed and SCIV always stayed in the back of my mind as the best game I’d ever played. Eventually I sought it out again and it’s not left my collection in probably over 20 years. In high school I remember over a summer break playing through it at my grandparent’s house, beating it a first time at about 52 minutes, then playing through it on the second run through just to see what changed from a difficulty standpoint. When the Wii VC release hit, I downloaded it and beat it. When it shows up on AGDQ as a speed run I’m always watching it.

A few years back the documentary The King of Kong: A Fistful of Quarters was on Netflix and I ended up watching it on a rainy Saturday afternoon. It got me to thinking about my favorite game of all time, and the one I’m arguably the best at compared to all of the others I’ve played over the years. So I decided to look around at high scores, as I sort of knew speed running it probably wouldn’t be something I’d be able to break new ground on at the time. I checked out The Castlevania Dungeon, MrP’s Castlevania Realm and a few other places to see what high scores were out there. There were players that had literally hundreds of thousands of points, and when you really try to play your best and rack up enemy kills and item grabs you quickly realize that seems like an impossible level to hit.

So I did more searching and came across Wii-Records.com which had a range of games to submit your high scores on. Luckily, SCIV was among the SNES titles available and I then knew my mission was clear: I was going to be the World Record highest scorer for Super Castlevania IV. Now, to level set expectations, I in no way anticipated this potential accomplishment would eclipse my college graduation, my marriage to my lovely wife, or my Ninja Gaiden high score chronicled in the March/April 1990 issue of Nintendo Power magazine (see the 10:49 mark), but I wanted to see if I could do it. My first score or two submitted got me into the top 3, but I was quickly dethroned by a Canadian gamer within days (much to my shock and anger), and I felt a patriotic duty to return the USA to first place in a hasty manner.

The trick I used was the long vertical stairs section of Block 9-2, the Zapf Bat stage, where a ton of candles can be whipped for money bags. With a few 1Ups gained along the way and a decent score you can grind out a really high score in this area (gaining additional 1Ups) and then leap to your death before proceeding to the boss. It was a little tricky because you need a little cushion as far as lives go to ensure you make it past a frenetic Clock Tower stage and all the way to Dracula without starting over. There’s a little risk, but after a while playing it’s totally doable assuming you don’t get any bad patterns.

After a few frustrating moments (mainly on that damn disappearing bridge leading to The Monster boss in the dungeon) I felt I racked-up an intimidating score that would not only put some distance between me and the 2nd place Canadian (I still have mad respect for “deane” and his 225150 score), but also serve as an imposing best score that might ward-off would-be gamers. On November 6th, 2012, nearly 21 years to the day I first played SCIV, I had racked up a score of 430350 on a single playthrough using the Wii VC and put the United States of America on the Wii-Record.com World Record map…in 1st Place. I won’t lie, it felt like I’d conquered my own personal Mount Everest.

SCIV has not only a place in my game room, but also in my heart and most-cherished memories. How big a fan am I? I cited in my 2011 book Lone Star Spooks: Searching for Ghosts in Texas that I was “the world’s biggest Castlevania fan” in my About the Author page front-and-center. So what about SCIV makes it so great? Well, here are a few thoughts by stage that stand out in particular: 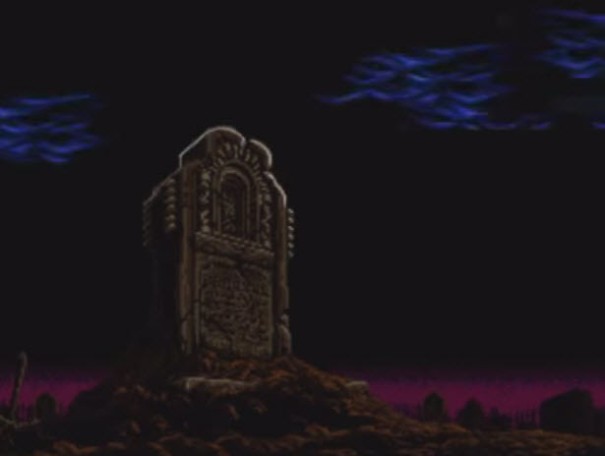 The rolling fog, that shattered tombstone, the threat of an ever-reviving evil sweeping across the countryside with only the Belmont family standing between the forces of darkness and the good people of Transylvania.

That ominous skull cave in the distance, the Morning Star destroying skeletons, whipping across chasms, and an awesome Rowdain finishing move! 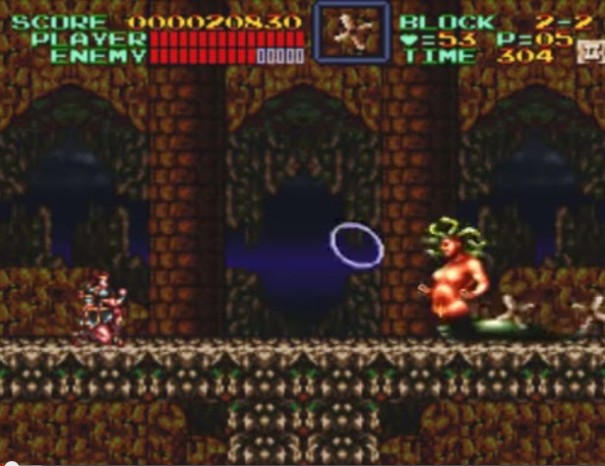 Amazing rolling thunderclouds, a topless Medusa fight over too quickly, gargoyle death throes, and going against the current. 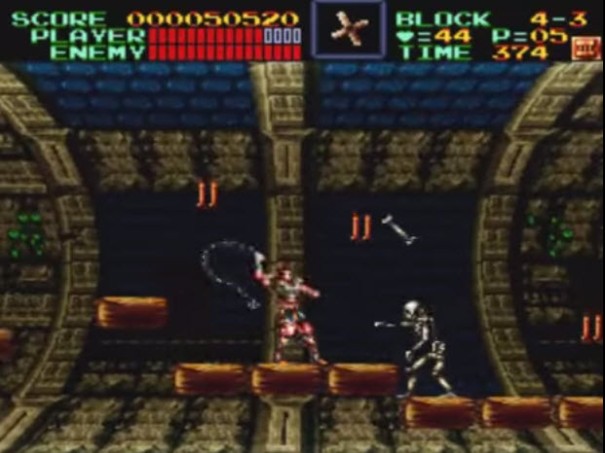 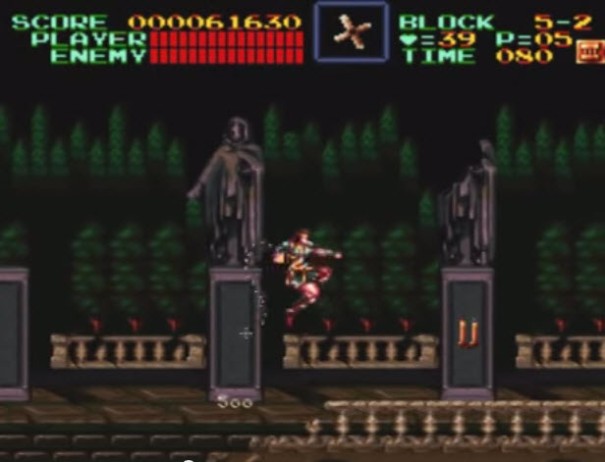 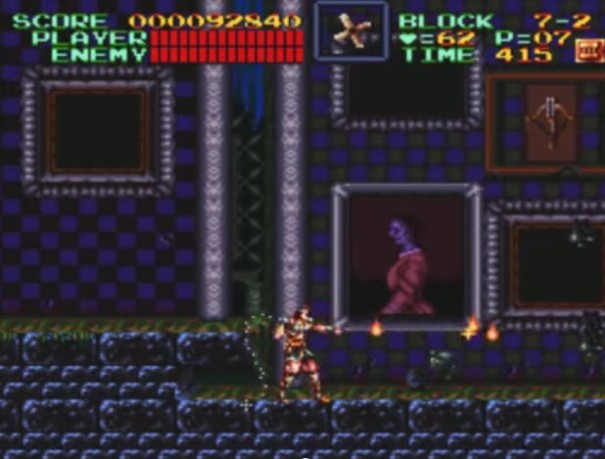 More ominous music, a fully-realized clock tower, lots of swinging about, STUPID MEDUSA HEADS!!!, and Akmodan II being a pushover with the Triple Shot Boomerang. 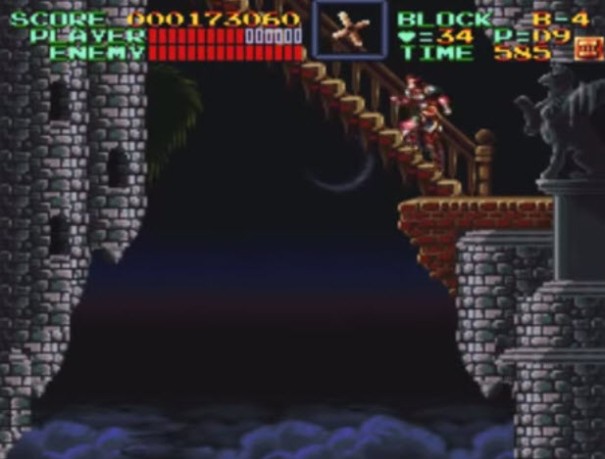 So there, like I said before: Super Castlevania 4 is not only the best Castlevania game of all-time, it’s also my favorite video game of all-time. I know not all will agree with me. I know someone will instantly beat my old high score. This isn’t an argument to change your mind, Castlevania fans, it’s just my opinion and a love letter to my favorite game of all-time. If there’s one thing we all can agree on, it’s that Dracula and his minions won’t stay buried and forgotten long. I’d like to think that somewhere way back down that fictional line I have a little bit of that old Belmont clan blood inside me, and like many of you I can’t wait for en excuse to be called back into action one dark and stormy night to the halls of Castlevania.